Although it is not really that spectacular, Kirkenes has been called the end of the world on several occasions. Of course, during the Cold War, it was obvious. It´s on the edge of Europe, often not on the map (I have to tilt my google maps all the time). That is why the cinema complex blew my mind, and when I was offered a free ticket for the current Bond movie, I couldn´t resist. It began with a mind-blowing chase in northern Italy, cars scratched, crashed onto rock walls, flew through the air, all before the opening tune kicked in. Th 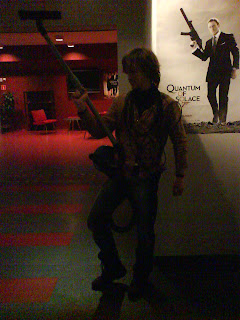 e movie itself has an interesting story line with a serious twist for environmentalists. I think though, that they could have gone into more detail on that particular topic (which I don´t name here because most of my readers would like to surprise themselves). What´s good about the movie? The imagery (it was shot more on location than any other Bond), the acting (Matthieu Amalric does an amazing job), the oily reference to Goldfinger, the pace, the choreography of the fighting (especially in Siena), part of the plot, the soundtrack. What was bad about it? That the story was a bit vague at times, compared to older Bond movies, the lack of humor, the absence of psychological depth when the subject of consolation is dealt with (as the title promises), and some scenes that could hurt the soul of a classic Bond fan, where his coolness becomes a kitschy caricature.
Nevertheless, I enjoyed the movie, and I have hopes for the future, that one day they could come out with an amalgamate of Connery-cool and Moore-wit.

2 thoughts on “Quantum of Solace at World´s End”