Arrived late at night, behind the train station (where KFC en MD are impossible to miss – I really don’t get how they managed to get their ugly neon logos onto this traditional building). I walked around in the old town, eventually asking some very polite Polish girls where I could find affordable accomodation. They took me away from the old town, to a house alongside the main road with a hostel in it. We woke up an American girl, who was actually an escaped cube slave, as I found out later, and a giant Hongkong man, who were both traveling alone. Silently, lit by my LED-light (O I love those little energy savers!) I sled into my bed and was away in minutes.

The next morning, I took a hot shower (showers were mixed in the hostel, so there tended to be a little gender confusion), ate breakfast, which they kindly offerd but consisted mainly of hardboiled eggs and bread with honey. Together with the coffee, it got me started though, and I walked into town to look around. Wha 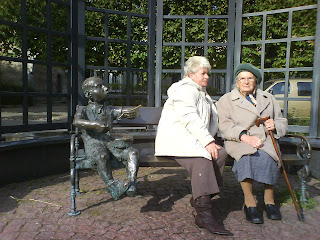 t to see in Danzig: 1) something referring to Günther Grass, the native nobel prize novelist, 2) something referring to Solidarnosc, the union that made Leck Walesa famous and symbolizes the first steps of the collapse of communism. Well, for 2) the docks with the large cranes nearby and a few logos were all I needed. Instead of the Solidarnosc museum I walked to a small square where Oscar’s Bench was located. And there he sat, the little feller from The Tin Drum (Die Blechtrommel) proudly drumming with his bronze drumsticks, next to two old Polish ladies that had a conversation. I sat on another bench observing the scene, which was really cute.

I walked back and took a tram to the old town. I walked around, bought a Polish-German language guide which I planned to study in reverse, and went to the tiny street where they sell amber, the product that gave Gdansk some economical importance. Finally I settled with another cup of nerve-broth and did what I like best: writing. Time went by quickly, and I managed to pen a few pages full (I was working on a German story).

Back in the hostel I chatted a little with the aforementioned escaped cube slave, who was very kind, and a really experienced traveler. I wrote a few more lines and then I went to sleep. 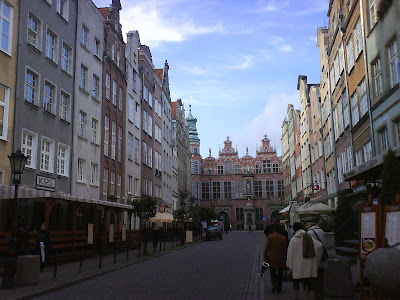