One assumption most people accept is that competition is always a good thing. When we talk about competition, we assume a scarcity of resources that can’t be shared and are fought over by individuals or groups. In this sense, competition is the natural state of organisms, from which they can only evolve if there is an immediate advantage in its opposite, cooperation. This logic is generally applied to human society, and searching for a synthesis of the two yields the neologism “coopetition”, where corporations share certain knowledge but remain competitors. At the core of neoliberalist thinking is the idea that the distribution of resources is most effective when we give free reign to competition and get out of the way as governments.

We are, of course, aware of the hypocrisy of this ideology, because the most competitive and successful companies by definition influence the government, and the implementation of the neoliberalist free market has always been a process of “kicking away the ladder” (Chang Ha-Joon), in which protectionism is villified only if the competiting country resorts to it.

This doesn’t mean we should give up the idea of competition altogether and try to reach the next level of spiritual awareness, cosmic unity and whatnot. We are beasts that are wired for competition, among other things. And there is one fundamental reason why we need to compete. We are intentional beings, we need the idea of goals and achievements in order to function normally. The vast inner world of our brain seeks purpose and will do everything to derive it from its input. This explains why religions have accompanied civilizations from their inception, as they give a sense of final perhaps (eschatology).

The fact that we have cerebal hardware for competition and purpose doesn’t mean that we have no other options. We should figure out how to use our hardware in a way that is beneficial to the planet and our grandchildren.

Here is a reconstruction of neoliberalism. The “purpose” that seems to be hard-coded into our culture is that of generating ever more, ever cheaper, and ever better consumer goods. Competition (between companies) is the best way to achieve that.

But what if not everybody agrees with this purpose anymore? Especially in the light of impending climate disaster and resource depletion, more and more people will move away from this idea, and consumption would have to be forced upon them in order to avoid the collapse of the economic system.

We all know that collapse will come one way or another. Resources will run out, and people will change their minds. Now I do think we can use the time-tested mechanisms of our brains, our inclination toward competition and our projection of a purpose, for the better, if we make sure they are under the control of our neocortex.

Let’s take an example from the home. Two siblings perform a household task, say sweeping the floor. They compete with each other who can sweep the largest surface within ten minutes. Because of this goal, they enjoy their task, accomplish the real goal (sweeping the floor) and the winner feels a certain gratification (that is not at all to the detriment of the other). Me and my wife do something similar when we tally the amount of times we each change our baby’s diaper: It’s more fun to do it. Currently, she is ahead of me, but I will catch up. 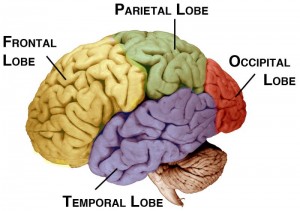 This mechanism, where we consciously control evolutionarily important but lower-level functions of the brain, could also work in larger groups (although it takes a profound cultural shift to achieve it). Using a third phenomenon for which we are hard-wired, honor, we could create the kind of harmless competition that makes everybody better off, and reward the winner with something valuable (the cultural value of honor can’t be denied, but we haven’t tapped into its positive feature of providing a victor with gratification without hurting the defeated). You can meaningfully compete to get honor. Compete over what? Producing food for example. It is an honor for the winner to share his harvest fairly with the community he belongs to.

This could be called healthy competition. It has recognized a common goal, and becomes playful. There is no drive to destroy the other, just a drive to be the best cooperator.

We can be better than Lord of the Flies.