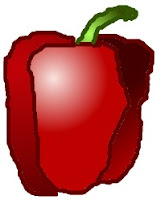 Today, in the supermarket, my conscious was brutally raped.

I had intended to buy a trio of red-yellow-green bell peppers and had laid the colorful things, wrapped in crackling plastic, on the belt.
The evil cashier glanced briefly at it as it was conveyed toward her, then resolutely grabbed it and tossed it in a little recycle bin at the corner of her cubicle.
“You don’t wanna have that. It has mould on it.”
-“Well I don’t mind…”
“No we can’t sell it. You can get another one if you like.”
-“Well no, I don’t want the other customers to wait for me…”
“Okay then, I’ll take it out.”
-“But I’d gladly buy it as it is…”

She didn’t even listen to me! Now I want you, dear reader, to feel and share that blind aggression toward a system of ignorance, mindless rules, emotionless machinelike workers, insane consumerism, exploitation of the planet and militant protection of “free trade”.
I want you to make a fist and hit it on the next nearest thing about the system that you encounter. Hit it in the air – hard. In the air? Yes, in the air – because there is no culprit. The system is delusional, dissoluted, distributed. It’s not the silly cashier – her evil is sadly banal. It’s not the gently boldening manager of LIDL – his evil doesn’t spring from his soul. It’s not the filthy rich owners of the supermarket chain, nor the government official that has a tête-à-tête with him. It’s everybody and nobody. It’s air.

But, great lord, let us still fight the system. Let us not intellectually suffocate our anger, but share it with each other. Let us all stand up for all the moulded Bell Peppers that our so senselessly thrown out of the system. Don´t you think it´s not a big deal – you weren´t there.

I will think of anger strategies, I will think of ways to take down the evil system that has disrespected the moulded Bell Pepper. A cavalcade of the Absurd, hitting the system hard at its weakest points is what you can expect.
Together we will undermine its last putrid mechanisms of justification. Beware – I will be back.

One thought on “Fight the System for a Moulded Bell Pepper”