We visit the good museum at the COPE center and learn about the results of cluster bombs. COPE helps victims of “bombies” that are sadly still prolific in remote areas of Laos, to get a tailor made artificial leg.

We have donated four legs. 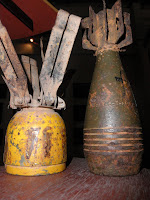 We visit Cope on two afternoons, and are guided through the free museum by the friendly staff. They show a good video about the clearance of cluster bombs in Laos, which is carried out by the organization MAG. They hire foreign military experts to train local personnel in cleaning large unexploded bombs, as well as the little fuckers that live in cluster bombs, in Laos better known as bombies.

In Vietnam, the Americans were bound to rules and regulations: bombing missions had to avoid temples and settlements. In Laos however, the Americans could bomb whatever they liked, and sadly, they did so with appalling immoderation. Over half a million missions had been carried out over Laos, and wide areas of the country are still saturated with bombs, more than 30 years after the fact. The museum has a map indicating the saturated areas, that are along the Ho Chi Minh-trail and in large areas in the north. The US army has bombed Laos, everything that moved in Laos, for a period of eight years out of an irrational fear of communism. The reparations they have paid to the people of Laos is laughable.

About forty percent of COPE’s customers miss their limbs because of UXO’s (unexploded ordnance). They are often children playing in the fields and finding a “bombie” or larger ordnance. Because of the booming scrap metal market they often forget about the danger and try to move it. “And then boom, two kids dead” a small boy recalls. We experience how it feels to ride an arm-driven bicycle and look at the world from the perspective of an amputee. We observe the collection of home-made prostheses, pieces of wood, zinc, plastic held together by rusty nails. The leg that has been worn for decades by a man before he received a custom-made prosthesis is also on display, along with his compelling story. It is explained how cluster bombs work, and I flip through a bulky volume that has detailed descriptions of hundreds of different types of ammunition.

COPE has an appealing donation program that we recommend. For only fifty dollars you can sponsor a custom-made leg. They also sell great merchandise in the museum shop, and offer the possibility to buy a symbolic “brick” in their wall. That wall is already decorated with the names of many corporate and individual supporters of COPE.

We decide to donate four legs and a brick in the wall. We also pick up a pink t-shirt that says “hello cluster bomb” and has a one-legged girl on it.