A couchsurfing host has responded to our mail and so we move to Ba Mo’s place in a calm district of Beijing this afternoon. 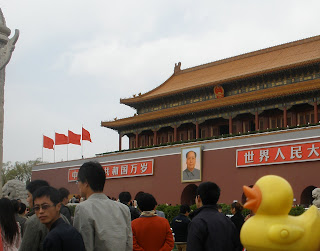 Before that we indulge in the tourist pleasures that this city has to offer (kindly note that cumulative endorphine levels during the preparation phase of a visit to the Forbidden City, the Great Wall, and other monumental reminders of this land’s glorious past are way higher than during the actual visit). We see the Yonghegong lama temple, the largest, biggest, hugest, most beautiful, most fantastic, most extraordinary, most holy, wholly, solely, rock ‘n rolly lamasery in town. it is a great place and manages to be an oasis of calmness in the middle of one of the loudest cities on the planet. The giant golden Buddha, hidden in one of the chambers at the rear end of the complex, is higher than a big house, and we enjoy a discreet peek.

TianMen Square. Place of a bloody massacre, the visible traces of which have ebbed away, very visibly guarded by chairman Mao’s vigilant portrait at the entry of the Forbidden City. We take in the views, gaze at the ubiquitous surveillance cameras attached to every streetlight, yes we do our jobs as tourists, penetrate the forbidden city and read about its stunning 9,999 rooms, see a line in front of a small counter and turn around, like little Chinese soldiers obeying a shouted command. We’ve got the idea now, and what most struck me is the resemblance with Moscow and East Berlin, due to (I guess) the Russian reconstruction of Beijing. The same broad boulevards flanked by the same squared blocks of concrete state power.

So we find our way to Ba Mo’s place and enjoy a friendly introduction. She also introduces us to the 798 art district, China’s acclaimed focal point of studios and creativity. The art district is very large, and on our first walk around, we shoot a lot of pictures before having a bite at a Breton styled restaurant. 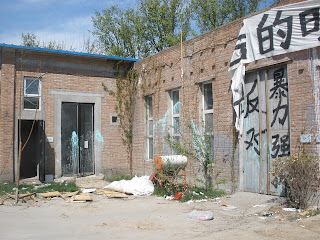 Ba Mo invites us for dinner and it is delicious. As we devour… pardon, I don’t like the rhythm of this “as we” and have to pull the linguistic brake. It spreads out my language like a viscous brown cream sticking to almost everything and clogging linguistic pores. If anyone gets what I mean here, preferably Bill Bryson, please drop a comment and we can exchange ideas. So, where were we? We enjoy the food a lot and have a nice conversation about the possibility of charity in China. Government control is ubiquitous, as we had expected, but we might be able to support local artists whose studios near 798 are in danger of falling victim to bulldozers. We decide to visit them, but not tomorrow. Kamiel wants to see the Great Wall. He thinks it’s stupid to go so near it and not see it, given the fact that it can be seen from the moon.

One thought on “April 27. Magnificent Beijing.”