An independent television channel operated by migrant workers from several Asian nations aimed at supporting their nationals who are employed in South Korea.

We visit their center and make a small contribution. 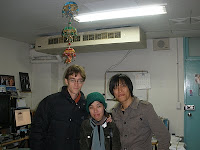 Among the labor-searching poor and political refugees of southern Asia, South Korea has a good reputation. Many migrant workers from Burma, Nepal, Thailand, Indonesia, the Philippines, and other countries populate the factories for long hours each day. They have often gone through immense difficulties trying to reach the country, yet their problems aren’t over when they do make it. At the workplace, their vulnerable immigrant status is exploited, they are kept in the factory and withheld their due wages. At the immigration office they are treated with disrespect, aggravated by the apparent language barrier. At home they hardly have anything to eat. In society they are reputed to disrupt the country’s economic prosperity, even though they do all the dirty work.

The non-profit MWTV has been founded by Burmese migrant workers themselves to shed light on their situation and give their struggle appropriate media coverage. They have done this successfully for a number of years and have grown to be a trusted instance for many migrant workers.

This video about the “thwarted Korean dream” illustrates how MWTV works.

We visit the small office of MWTV near Namsan, Seoul, and talk to some of the volunteering journalists. It’s a nice atmosphere, suitable for a small ambitious organization that is de facto the nerve center of many of the migrant workers social activities.

We endorse and support MWTV because it does a great job, both in offering migrant workers reliable news in their mother tongue and creating awareness among the Korean public, that sadly tends to dislike the situation, rather than embracing it as an opportunity for cultural exchange and moral self-improvement.