In a small village near Kisumu, we have built an orphanage together with our Kenyan friends.

Charity Travel provided building materials and wages for the workers. Many local and international volunteers helped out. Thanks!

A small community can have a great vision. When we traveled to the estate of Andrew Ogol and his son Philip, we couldn’t dream about their remarkable determination to construct an orphanage that is much more than an orphanage alone. As a Community Excellence Center the “Rainbow Center” will reach out to the whole community as a focal point of excellence related to education, vocational training, communication, and income generation. As an exemplary project, it will in a later stage share its expertise with needy communities around the country. 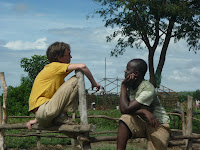 Our vision is documented in the constitution of the Kenyan NGO Vision Alive, that will work in close affiliation with the Center. The building of the Center was the first phase; we are looking for corporate and private sponsorship to operate it sustainably in the future. We present a proposal to several big Kenyan Corporations, mainly banks and mobile phone companies, all of which have a CSR (Corporate Social Responsibility) department. We are confident that some of the Corporates are willing to attach their name to our excellence center. We have formulated our vision in many ways, and harvested the enthusiasm of many people, including influential journalists (we were interviewed by the Standard group, one of Kenya’s leading media houses) and politicians (the MP of Kisumu town west has shown genuine interest in our initiative).

But we have to show them something. So I decided to build the Rainbow Center on my own – with a little help of my friends. We first arrived in the village on December 20th, 2009 and started straight away. The location was marked, poles were put in the ground, materials were bought in a major warehouse in Kisumu (I have all the receipts), wooden skeletons of the walls were brought up and filled with mud that we made in a puddle next to the building with water that we had to get with a handcart, the roofing timber was installed with long nails by fundis who did the accurate measurement, over sixty iron sheets were painted in the colors of the rainbow and then put on the roof – in just ten beautiful days we have constructed the raw building and on January 1st we could leave it in Philips hands to be leveled and plastered… 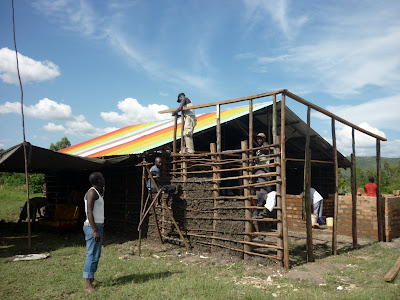 The roof is up, bricking of the office is half way done on Newyear’s Eve …because we came back on January 14th, 2010, to finish the work. The plastering has gone smoothly and the walls were almost ready to be painted. After a quick visit to Obama’s grandmother who lives in nearby Kogelo (talking to her and seeing the grave of Obama’s father was fascinating to some extent – but more importantly she could give us the contact of a Swiss NGO donating solar panels), we are ready to swing the brushes. Yeon supervised the design and execution of a lovely artwork on the front walls of the Center. We started painting early in the morning to avoid the murderous afternoon sun. In the course of a few days, there appeared an elephant, a jaguar, a hippo, balloons, children, and a large rainbow on the walls.
The community is already talking about the Rainbow Center, and we are confident that it will be accepted and supported, making a real impact.

Without the volunteers we couldn’t have done it. We are grateful to everyone who has given us a hand to dig holes, hammer, fill walls, plaster, and level the ground. Also our traveling friends Kenya (Mexico), HD(US), and Cleverson(Brazil) deserve our gratitude. They are among the first people actively incorporating the idea of Charity Travel. Asante! 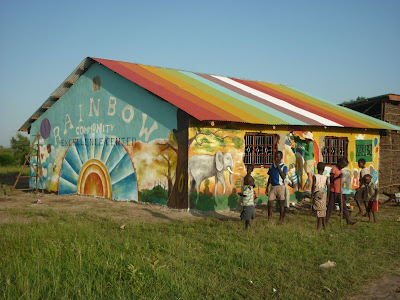 almost done! The walls are painted and the window frames are put in. HD repairs a piece of rainbow.

We have finished our part of the construction on January 22th, 2010. It has been the largest cause Charity Travel has supported so far, and it has been incredibly rewarding. We will be communicating with Philip regularly and support where we can to make Rainbow a success and a good example for the rest of Kenya and beyond. 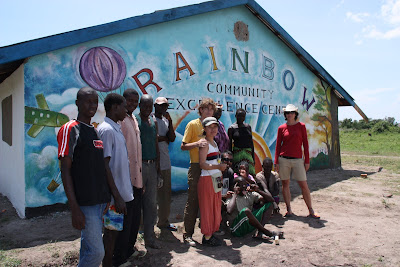 in front of the Rainbow Center with kids and volunteers, just before we leave.

If you are visiting Kenya, do not hesitate to combine your trip to the Lake Victoria, the Maasai Mara, Mt. Kenya, or other game parks with a visit to our vibrating Community Excellence Center, and donate your knowledge and experience. Or simple have a look around and be inspired. 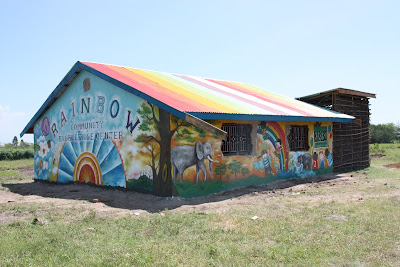 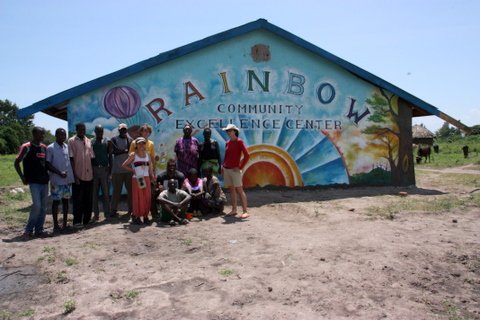