It is easy to visit the Crimea from Kiev. There is an overnight train leaving from the main station of Kiev, and arriving in Sebastopol about 16 hours later. I paid 240 griven (about 25 euros) for both ways, which was not the best bargain you could get at the time, but still cheap. The company I had on the train was not to 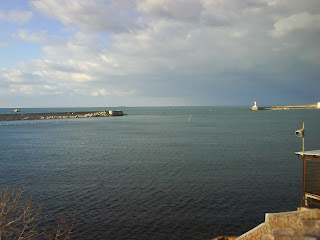 o exciting: a drunken man tried to couple me to a blond Kazach woman and then offered me a bottle of Ukrainian beer I really didn’t want to drink. But I could sleep eventually. Some young boys spoke German, and translated some of the drunk’s grunting into something I still didn’t understand, but sounded familiar to me, at least.

In Sebastopol, a boy helped me finding the center. There are plenty of buses going from the station to the coast. There I walked around (I had left my big backpack in Kiev, and hence sight-seeing was very comfortable). I entered an old yachting club complex, ignoring the “keep out” signs, but there was really not so much noticable to keep out of. It seemed like an old Soviet yacht port, left behind by the people who were rich in communist times – but I can be wrong about that. The view to the Black Sea was great. I was not the only one who thought that way. Next to me two big soldiers looked out over the same water, with a rifle and a kalashnikov in their hands, and making a very active en guarde impression. Fortunately, the two men, who stood maybe 30 meters tall, were from bronze, and stood there probably to remind the people of the braveness of their flesh and blood counterparts, who died in the war against nazi Germany. 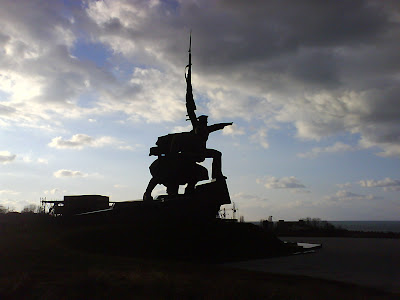 I saw some monumental buildings, too, and climbed the hill to a Panorama. Great view from there. Unfortunately, the museum was about to close so I missed what was inside that round building on a hilltop. After this, I decided that I had had the kind of impression I searched for, and I moved to the yellow arches, where I would meet a friend of Helena’s, who would let me spend the night with him. And so it happened. After a few pages I wrote over a cup of Jacob’s, I was picked up and taken a long maschrutka ride away, to some flat in the outskirts of Sebastopol, where they offered shower-meal-bed. We also watched tv: a Russian series adaptation of Dostoiewski’s idiot was on, with Ukrainean subtitles. I couldn’t understand much, but since I know the book, it was a pleasure to watch the play. That night, the cat varia slept on my blanket. 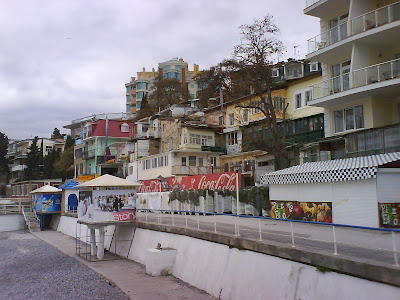 One thing you should not miss while visiting the Crimea, is the maschrutka trip to Yalta. I got up at six, and managed to take the 7:25 bus, which took me to Yalta for only 22 griven. I could watch the sunrise behind the mountains, and after a while, at the sea side. Yes, the road follows the coast and it is really beautiful. I am sure I’ll return here sometime in the summer. So, Crimea visitors, you know now what you have to do…

In Yalta, I bought my ticket back, just to make sure I wouldn’t be late for my train back to Kiev, and then headed downtown to get some impression of this small town. I gazed at the rough foggy mountains that dominated the bay every once in a while. I walked down i 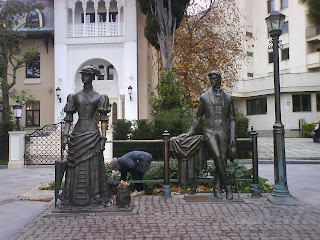 n an obvious way, arriving in the center and walked on some boulevard. English was not spoken in the hotels I asked, and I couldn’t trace a fancy tourist information office with a little map and stuff as I’d expected. But no matter. I walked around on my own and saw the small houses, looking very mediterranean here. I saw an old man swimming! Just taking off his clothes and looking straight into the water. And I saw a man with a heavy beard, walking with his bicycle with two sheep on it. I tried to make eye-contact, but he didn’t seem to see me. Did he come from the mountains to sell or buy those sheep? I wondered about his story. For one reason or another, I remember him.
But I had some work to do. I took Lenin’s picture, and went to a cafe I had picked earlier. I wrote some pages, and digested fried fish that tasted fried very much fish not really. A man talked to me, complaining about visa issues that are indeed very hard for Ukraineans. I said it was a shame it was this way. Here are many people who have to wait months if they want to visit their family, and the European Union makes them go through a painstaking process. Their citizens (like myself) may travel freely an 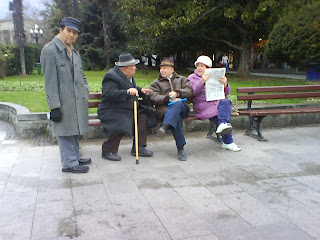 d happily. So I agreed with that man very much, and went to the bus station. Soon I sat in my warm bus back to Sebastopol that went uphill for some time. Then I saw – the man with the two sheep! He had been walking all the time. I made a quick note and decided to wrote a story about that man. What a life!

I waited two more hours in the station of Sebastopol, writing and drinking tea. On my train back I didn’t talk to anyone, and lied down most of the trip, since my throat hurt a little. Nothing to worry about – two days later I was perfectly fine.