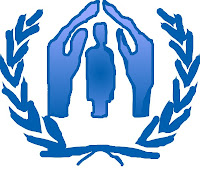 Boat refugees are a common phenomenon: Every few weeks the news of a vessel trying to make it to Italian or Canary shores reaches us northern Europeans. The direction of the refugees is always south to north (with the exception of Australia of course, that is dealing with desperate newcomers from the north).

Of course, the vast majority of refugees never make it to the Western world. Here is an article about the recent UNHCR report about refugees that shows the top five countries with most refugees per dollar GDP: Pakistan, DRC Congo, Kenya, Chad, Syria.

Refugees don’t leave their birthplace easily they have suffered unimaginable economic hardship, a terrorizing regime, or the consequences of a devastating natural disaster.

Is it imaginable that a European-born caucasian white non-criminal well-educated male chooses to flee his country?

I was born in the Netherlands and carry a Dutch passport. I have married my South-Korean girlfriend and she would be entitled to stay in Holland for that reason (or for that matter, in any Schengen country) if I can show I can support her, which means I would need to prove earning a substantial salary (a lot more than we happily subsist on). This is, given the current labor market situation and my lack of work experience, an impossibility. There are further restrictions, such as a lengthy registration of the marriage certificate and enforced health insurance. A friendly Turkish-born lawyer has explained me these and other restrictions in a small room in one of Berlin’s administrative buildings. That means I have to leave my birth ground (and the socio-economic bloc it is part of) if I want to stay with my wife. And believe me, I prefer my wife a thousand times over the protofascist polderland.

It is an unequal comparison: My suffering and feelings of injustice and abandonment by the Dutch state and by extension the European Union, are of laughable proportions compared to the human tragedies in less fortunate countries.

But this is a political statement: Can the northern rich countries’ policies toward “strangers” (in Albert Camus’ sense) become so appalling that its citizens decide to leave its territories? And in doing so, do these highly sensitive citizens have any persuasive power toward their peers or would they just be ignored as a curiosity in the margin? Do their actions show the absurdity then, of their godforsaken country’s laws that in aiming at protection of its citizens tragically ostracizes its more world-open denizens, the ones who chose to marry someone from a far away country?

3 thoughts on “Fleeing from North to South”