We make the table today, with the few tools available. A rusty saw and a hammer that loses its handle twice. But we finish the table and the kids start painting it. Ruby cooks a delicious meal again and they serve us like royal visitors. Are the having any expectations, like some of our very niiiice Kenyan acquaintances? No. They are genuine, honest people and they don’t have the gribbely grabbely grasping grip of greed. 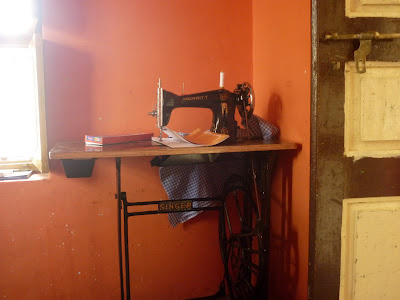 We suggest to support an income-generating program and it is decided to be pickling. Ruby is a learned cook and has done a lot of pickling. If only she had a good stove, dozens of containers, all kinds of spices, garlic, tomatos she could make EphPhata pickles they could sell. So we jump on an autorikshaw and buy everything that she needs. The very same nice Ruby starts the pickling, and many kids help her peeling the garlic in the pale moonlight. They are seated in little groups and merrily tossing the garlic cloves in round bowls. When I go brush my teeth later that night, I find Ruby awake behind the new stove, still preparing the garlic pickles.

Martin, son of Nehru, is the one who drives the motorbike and he is good at it. I ask him and he lets me try the light bike, present of the British benefactor, that is taking him around town, and next thing I know I am sitting on it and he explains me clutch – brake – gear – choke. Everything you ever wanted to know about motorcyles but never dared to ask. Ha! It is not that easy though. I drive a few circles but have to kickstart the bike a couple of times because I released the clutch to spasticly. But in case I need to ride, give me an hour and I’ll have figured it out. 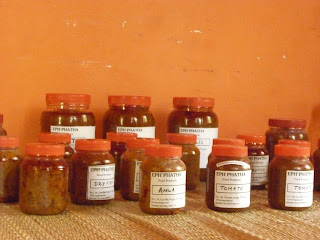 What else? We visit the Tiruvanamalai temple, a huge complex devoted to Shiva and a round-the-clock attraction for enthousiasts of religious practice. We parade along a crowded plaza packed with cheap jewelry stalls, and a row of thick columns occupied by miserable beggars in dirty rags, we then take off our shoes and walk into the temple. They are taking paper copies of parts of the wall engravings by putting a sheet of paper on the wall and rubbing it with something black. Makes a nice souvenir. Deeper inside the temple complex there is a reel elephant taking the visitor’s coin in his trunk, patting the visitor on the hat and delivering the coin to its owner. We also do it and it’s encouraging being patted by an elephant trunk.