We visit the slum with director Nirmal and support a tailoring vocational training program with a sewing machine. 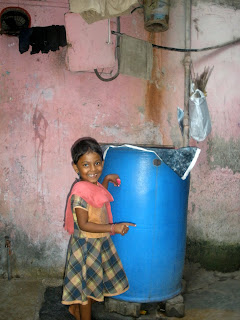 It’s our second day in India and we get back to work. We haven’t yet identified a Cause though, so where to start? For those looking to do something good, there are many possibilities on Mumbai’s buzzing streets, believe us. So what works for us? We simply walk into a YWCA branch and ask for small ngo’s. They send us to CORP (Community Outreach Programme) India, a medium-size ngo working in Mumbai’s major slum areas, including the famous Dharavi slum, home of approximately ten million people. Those who have seen “Slumdog millionaire” would surely remember the scene where the hero, in a flashback, rushes over the rooftops of slum dwellings. That’s the place.

The contact is uncomplicated and after we have been welcomed at CORP we take a cab to Dharavi together with the head of the ngo. He tells us about the living conditions in the shantytown: the narrow streets, the very small rooms walled with bare concrete that function as bedroom, bathroom and toilet – for an entire family with four or five children; the public borehole toilet that charges a rupee a go thus causing the very poor to hold it in; the improvised electricity in the streets, the open waste water canals. We see all of this with our own eyes.
But life is not terrible in Dharavi. Violence has decreased since the 1990s and the five major religions are living together in peace. Employment rates are not bad either with a lot of the world’s famous clothing brands are producing here. 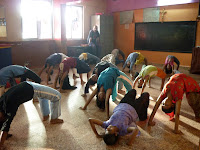 CORP runs about a dozen projects, two of which we visit. First we visit a center for women, where we are welcomed by a group of enthusiastic, beautifully dressed ladies. They are rehearsing for a theatre performance for women’s day tomorrow, and they tell us about the script. A girl is not allowed to study at first, then persistently fights her way to her mother’s reluctant permission, and (obviously) manages to become a doctor. When her lazy brother refuses to support their mother in old age, she is expected to step in, and she faithfully does. The narrative is simple and convincing. It could also be performed in Africa, I think, and I ask for the script. Yes, we will share it with our friends in Kenya. 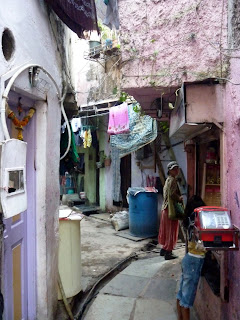 Meanwhile, Yeon gets her hand decorated by a very pretty girl, using a technique called mehndi. They take a two-month vocational training here, after which they can start their own business.
When the hand decoration is done, we go upstairs, where another vocational training is taking place: tailoring. Six girls are working with sewing machines, while some other girls are sitting on the floor and sketching.
“With more sewing machines, we can teach much more efficiently” Nirmal explains. We decide to donate one.

The second CORP project we visit is an orphan home with 65 resident children. It is really well organized and we are happy to have a look around. The children are just having a yoga class, a friendly smiling teacher makes them fold themselves into little bridges. Meanwhile, we talk to an American couple that is closely involved with the orphanage and has been supporting them for many years. We are sure this place can be a striking example for other Community Outreach Programmes around the globe.